# Where does the pattern come from?

The pattern was created by Scottish shepherds in the 19th century who would knit clothes to protect them from the cold, and incidentally came up with the notorious black and white houndstooth pattern, choosing the two colours for their neutrality. The pattern became famous in the 1930’s as a symbol of elegance; it was worn by the prince of Wales and was immortalised in a line of iconic suits designed by Dior.

# How to wear houndstooth

The contrasting colour schemes featured in our collection of houndstooth socks make them an elegant, decorative detail to any outfit. To really make these socks stand out, pair them with plain clothes and match them with the colour of your shoes to highlight the colour scheme. For a more discreet look, match the colours of the pattern with your trousers for a leg lengthening effect!

# Why is it called houndstooth?

The pattern received its name due to its resemblance to a dog’s tooth. However, there must have been some confusion when it was translated into French as it is known as ‘pied-de-poule', which means hen’s foot! 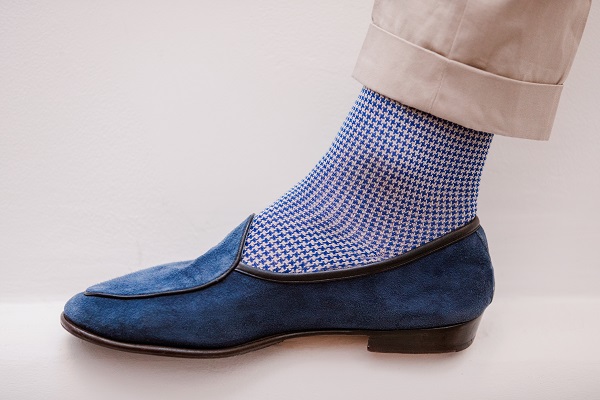 We will notify you on events like Low stock, Restock, Price drop or general reminder so that you don’t miss the deal

Are you sure you want to delete the wishlist?
EN
EN